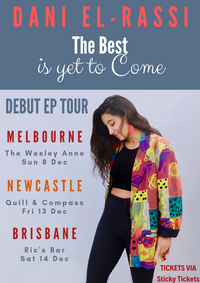 Off the back of selling out Sydney's 'Oxford Art Factory' and various other NSW Venues, Dani has just announced her Debut EP Tour which will stretch from Melbourne, through to Sydney, Terrigal, Newcastle, Tamworth (Country Music Festival!) and Brisbane. On the road with her band and crew, Dani will be bringing audiences across Australia her newly released music, as well as some oldies and some exclusive unreleased content.